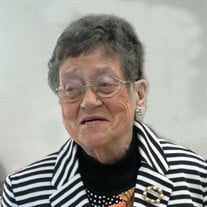 Avis Marie Apple Piper Morford Hawkins, age 97, of Greenfield, passed away February 22, 2021, after a brief stay at Greenfield Healthcare Center. Avis was born January 27, 1924, on the Rush County homestead built by her great-great grandparents, Stephen & Elizabeth Wandel, to her parents Ola C. and Leona Clark Apple. Avis graduated in 1942 from Mays High School in Rush County. She attended Cincinnati Bible College, Ozark Bible College in Joplin, MO, and Milligan College in TN. Avis was a Christian teacher, church builder, and a mom to all in need. She served churches in Indiana, Missouri, Kansas, and Tennessee. For most of her life she was a song evangelist, instrumentalist, and advisor -- playing the piano and organ. She was involved early on with Revival Flames Ministries, and also the Mahoning Valley, Allendale, Roaring River, and Appalachian Christian Youth Camps. Avis was also a prolific poet & author, still writing well into her 90's. She married Richard Piper on April 2, 1943. She married Ralph Morford on September 4, 1976. She married Carl Hawkins on January 22, 2001. All three husbands preceded her in death. Avis was a foster parent to both Evelyn Means Graham and Martha Carter Scott during their teenage years until they each married. The Graham and Scott children have always treated Avis as a grandmother and she loved them very much. Avis is survived by her sisters, Aleene (Byron) Hunsinger and Esther Newhouse; Step-daughter, Debra Webb; Step-sons, Daniel (Robin) Morford and Garry Morford; and several nieces and nephews. Along with her husbands and parents, she was preceded in death by her brother, Thurman (Greta) Apple; Infant twin sisters, Mary and Martha Apple; Brother-in-law, Nelson Newhouse; and Nephew, Chris Hunsinger. Many thanks to the staff at CrownPointe Assisted Living of Greenfield for nearly 7 years of compassionate care. Her caregivers supported Avis with the dignity and respect that any family member would appreciate for a loved one. The family invites you to watch a recording of Avis’s funeral service here: https://us02web.zoom.us/rec/share/zj31MHoHpfXGL1WGOljF9MsxipHk13EDIxDHag3vdBWPdsSZdczlCynLOcwCYFFe.DYlqks9hk4lUPSSX?startTime=1614274830000 In lieu of flowers, memorial contributions may be made by mail to the Hope House 35 E. Pierson St., Greenfield, IN 46140 or by website at hancockhopehouse.org. Friends may share a memory or condolence at www.erleweinmortuary.com. Arrangements are being handled by Erlewein Mortuary & Crematory in Greenfield.

The family of Avis Hawkins created this Life Tributes page to make it easy to share your memories.