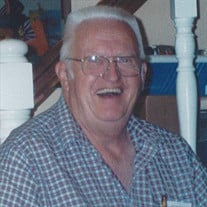 GREENFIELD - Arnold Elvin Myran, age 87, of Greenfield, passed away on Thursday, January 31, 2019 at Springhurst Health Campus. He was born in Silverton, Oregon, on September 27, 1931 to Elias and Agnes (Sunde) Myran. Arnold graduated from Decorah High School in 1950. He proudly served in the U.S. Army during the Korean war from 1951-1954. On April 9, 1954 Arnold married Barbara (Boren) in Indianapolis. He owned Myran Refrigeration in Hancock County for many years before retiring in 2006. Arnold was a member of New Life Christian Fellowship in Fortville. He loved antique John Deere tractors and was very active in his church. He cherished spending time with his family and adored being a grandpa. He was an avid reader. Arnold never turned down a chance to help others. He enjoyed going to auctions and collected tools with those he made furniture for his grandkids as heirlooms. Arnold is survived by his wife, Barbara Myran; sons, Daryl (Lou Ann) Myran and Keith Myran; daughters, Cindy (Ed) Weisheit and Karla (Michael) Howard; five grandchildren, Brynne (Michael) Snyder, Jade (Elliot) Frost, Ethan (Claudia) Weisheit, Laci (Tappan) Fitzgerald, and Noah Howard; great-grandchild, Monserrat Weisheit; brother, Francis Myran; and sister, Mae Short. He was preceded in death by his parents, Elias and Agnes Myran. Visitation will be held on Sunday, February 3, 2019, from 2:00 p.m. until 6:00 p.m. at Erlewein Mortuary & Crematory, 1484 W. US Hwy. 40, Greenfield, IN 46140. A funeral service will be held on Monday, February 4, 2019, at 11:00 a.m. at New Life Christian Fellowship, 1574 IN-234, Fortville, IN 46040. Pastor Mark Adcock will be officiating. Burial will follow at Old Oaklandon Cemetery in Indianapolis. Memorial contributions may be made by mail to New Life Christian Fellowship Building Fund, 1574 IN-234, Fortville, IN 46040 or envelopes will be available at the mortuary and church. Friends may share a memory or a condolence at www.erleweinmortuary.com.

The family of Arnold Myran created this Life Tributes page to make it easy to share your memories.