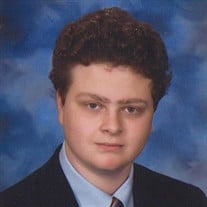 Our beloved son, Adam Spence Grimes, passed away April 18, 2022 in Muncie, Indiana. Adam was born September 20, 1996 in Michigan City, Indiana. He is survived by parents, John and Amy Grimes; daughter, Sally Rayne; grandmothers, Nancy Grimes and Caroline Adolphson; aunts and uncles, Mike and Chel Grimes, and Jeff and Laura York; cousins, Hillary Eckert, Sarah Moser and Noah Grimes; fiancée, Amber McWilliams; and a host of other relatives who loved him dearly. He was preceded in death by his grandfathers, John Robert Grimes and Emil Edward Adolphson. Adam had many passions in life, and poured himself completely into each of them. He loved being on the radio. He obtained his Ham Radio operator’s license as a teen and participated in the local Ham Radio group, including several national Field Day events. He was very active at the high school radio station, broadcasting sports events and a morning before school-program. In high school, he spoke about radio station events more than his grades! After graduating from Greenfield Central High School in 2015, he earned his Bachelor of Science degree in Meteorology from Ball State University in 2020. He loved all aspects of weather. He participated in the Ball State Storm Chasing Team. He called family members to give them severe weather updates for their areas, urging them to head for their basements if need be. After college, for a brief time, he worked at Hillcroft Services in Muncie, where he supported three intellectually and developmentally challenged adults in a home environment. Later, he returned to radio, becoming a dispatcher for Delaware County Emergency Management Services. In addition to responding to and directing thousands of 911 distress calls, he also assisted with local emergency situations as a volunteer. He was a member of Trinity Park United Methodist Church, where he enjoyed serving on the sound tech crew for church services, weddings and other events. Adam loved animals, especially his dog Willow. Willow brought him a lot of comfort. His great joy was being a father! Although he was only a father for a short time, he was “all over the moon” over his newborn daughter Sally. His life on this earth was too short, and we will miss him dearly. Our faith in God will get us through. Visitation will be Saturday, April 30, 2022 from 10:00 a.m. to noon at Trinity Park United Methodist Church, 207 West Park Avenue, Greenfield, Indiana. Services will follow at noon. Arrangements are being handled by Erlewein Mortuary & Crematory in Greenfield. Memorial contributions may be made to Trinity Park United Methodist Church at 207 West Park Avenue, Greenfield, IN 46140. Memorial contributions can also be made to the Delaware County Emergency Management at 210 S. Jefferson St., Muncie, IN 47305.

The family of Adam Grimes created this Life Tributes page to make it easy to share your memories.